When it comes to wedding that too an Indian wedding you can’t just seat back calmly. Apart from a long list of rituals and ceremonies there is also dancing and singing throughout. I am sure you’ve never heard of any Indian wedding without noise whatever community or religion you belong. In Indian wedding ceremonies the loudest and most enjoyable ritual is a sangeet ceremony that takes place from both the bride and groom’s side. The entire family and friends get together and present single or group dance performances dedicated to the bride and groom. Sangeet ceremony is the only pre-wedding ritual where two families come together to celebrate the evening. 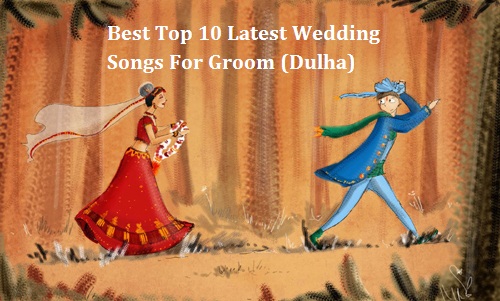 In an Indian sangeet ceremony there are many songs that can be performed. Romantic songs are preferable for the duo while family songs and other heavy loaded songs are for the group performances. Friends and siblings perform in funny and naughty songs to tickle the excitement the bride and groom feels at that point of time. There are so many songs and lyrical dance that will make you go gaga over the evening.

Here are top 10 wedding songs for groom side that can be performed on the pre-wedidng sangeet.

Wah wah ramji is an all time favourite wedding songs for the groom side. Sung by SP Balasubramaniam, the song is from a super hit Salman Madhuri film released in early 90s. The song was performed by the brother of the groom. He is congratulating the duo on their d-day.

Another Salman khan song from the movie salam-e-ishq, Hiriyen is not a direct wedding song. But the lyrics say that the boy will come as a groom and takes his girl away with him. Priyanka was the main lead in the song and it makes a perfect song for the groom.

The Srk-Kajol starrer longest running movie in India, ddlj has this marvellous wedding song. The song is an apt for the groom as it commands the bride to be ready and her prince will be coming to take her with him. It is not only a block buster song released in mid 90s, but also a mandatory one in Indian weddings.

Nagada baja is a song from Shahid-Kareena movie released in the early 20s. The lyrics and the music of the song is based on Punjabi music. It is sung by an ace singer sonu nigam. Shahid performed the song and complemented Kareena about her beauty and how she takes all the attention away by her grace.

The trio, Salman-Priyanka-Akshya, were featured in the song, mujhse shadi karogi. The title track from the movie released in late 90s, has full energy and power pact music and lyrics. The two heroes keep asking the girl whether she will get married to either of them or not.

Gal mitthi mitthi bol is another wedding song performed by Abhay deol and sonam kapoor. The song was shot for a movie released in early 20s and the song was shot on the occasion of a wedding. It has Punjabi lyrics and a little bit of southern Indian music. The mix and match made an awesome piece of track for any Indian wedding.

Dilliwali girlfriend is a song from the movie yeh jawani hai deewani. The song was featured in the movie on the occasion of sangeet ceremony. The lyrics of the song say that the guy has left his girlfriend from delhi just to come to meet his bride.

Siddharth Malhotra starrer movie released in early 20s, has this huge popular wedding song, Punjabi wedding song. Punjabi, Hindi and a little bit of English lyrics made the song fun-filled. It is a duet song and can be performed by the family or the groom and bride.

One of the biggest movies in 20s, Kal Ho na Ho has this awesome song. Performed by Srk, the song is made for the groom side. The song basically a family song and bride side can also perform on the same.

Ainvayi Ainvayi is a song from the movie band baja baraat. The song was written in Punjabi and Hindi language. Anushka-Ranveer was featured in the movie released in early 20s. It was Ranveer’s first movie where he played a wedding planner.