Holi is one of the most popular festivals in India. As with all other celebrations, Holi too is incomplete without some quirky tunes. Bollywood therefore comes up with some awesome Holi tracks that make their way into the year’s best Holi chart toppers. However, there are some songs which have just smashed all records when it comes to celebrating Holi. 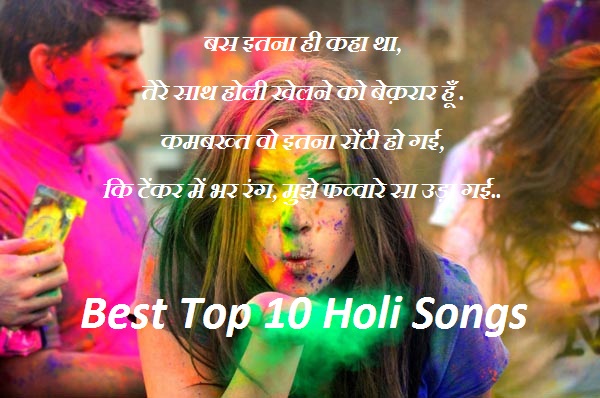 Some songs just seem right while you are throwing color filled balloons or scraping someone’s face with Gulaal. The nakhras (tantrums) some ladies do before being covered in colors or the unrecognizable faces in the purple blue colors are all part of the Holi celebration. Some of these songs have all of these lyrically intact in their notes. Perhaps this is the reason these top 10 songs have made their way into the hearts of so many:

Soni Soni Akhiyon Wali is from the movie Mohabbatein which featured Shah Rukh Khan, Jimmy Shergill, Anupam Kher, Archana Puran Singh and many others. The movie had an ensemble cast and in this song all the characters are seen dancing and frolicking. This song is also considered an iconic Holi song.

As the title of the song suggests – Rajesh Khanna in this song declares that he is not going to leave anyone and just play Holi! It doesn’t get any straight forward than this. Belonging from the hit film Kati Patang, this song has a fast rhythm and gets everyone grooving retro style.