Has there ever been a time in history when weddings have not celebrated Bollywood? There is just something about those Desi tunes that gel well with our wedding sentiments. Right from the engagement to the vidaai for every occasion Bollywood has a song for us.

Haldi is among the most cherished ceremonies in the desi culture. A lot of teasing goes on around this ceremony- along with the buildup anticipation of the big day. Therefore the songs have to have that little nudge about the wedding day along with slight teasing.

The bride and the groom both are indulged in this ceremony and therefore the song list can be varied. There can be different songs chosen for the bridal and different ones chosen for the groom. The astonishing fact is that for all of these scenarios there is a song in Bollywood.

These songs which are going to list for you below are some of the most cherished songs. They have been around for years and they are played in almost all wedding ceremonies. Along with the old, evergreen ones, we have added a few new songs to maintain the vibrancy of the event. 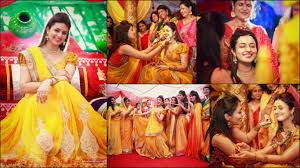 So here are the songs we are talking about –