The most versatile singer of the industry needs no introduction, her sweet and mesmerizing voice is undoubtedly very different. Shreya Ghoshal is a singer who has countless contribution towards Bengali, Kannada, Malayalam, Marathi, Tamil, Telugu, and Punjabi and Hindi music. She can fit her self comfortably to sing songs of all genres. She has also received credits by her audience and the country too. 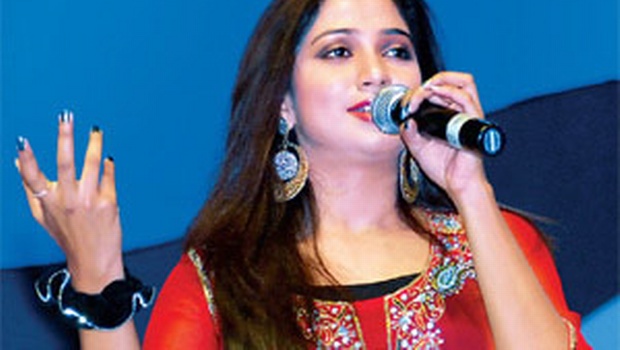 She has been awarded by national awards and has also been applauded by many other awards. She is one of the best singers and is also praised as the queen of melody by her loved audiences. She is a female playback singer who has given millions of hit tracks in various languages. She had spent her early life in Rajasthan and later moved to Mumbai with her family. Her first song was recorded in 1997 and it was a song that she sung in Marathi.

Her voice was recognized in Bollywood when Sanjay Leela Bhansali gave her first song in Devdas. From then, there was no looking back for her. She was the most acclaimed singer. She had sung Bairi Piya and Dola Re Dola in Devdas. Here are the ten best songs of Shreya Ghoshal in Hindi.

This was her first song in Bollywood that she song for Sanjay Leela Bhansali’s Devdas. She had sung this song for Bollywood best actress Aishwarya Rai Bachchan and Madhuri Dixit Nene. This romantic melody was sung by Shreya Ghoshal, KK and Kavita Krishnamurthy. She also sung another song from the movie which is also a romantic duet of Shreya Ghoshal with Udit Narayanan.

This is a sensuous item number from the movie Agneepath. This song is picturized on Actress Katrina Kaif and was released in 2011. This song was also a hit and a dance track for every party. The singer had proved that she can sing all songs of every genre.

The performance of Shreya Ghoshal in this song was mesmerizing and praised by all. This song was from the movie Guru and the great names of Music like AR Rahman gave her the chance to sing this song. She filled this song with her melodies and also received many awards for this song.

This song was featured on the romantic king Shahrukh Khan and Katrina Kaif from the movie Jab Tak hai Jaan. She sung this melodious and romantic duet with Mohit Chauhan. The music of this film was also composed by AR Rahman and he gave her the chance to give this new hit.

The most listened romantic song of the year 2012 was Dagabaaz Re. Shreya sang this song with Rahat Fateh Ali Khan for the movie Dabangg . This song was a blockbuster hit and to make it more popular Salman Khan was the actor in the song.

Another hit by Shreya Ghoshal and Anu Malik was released in the year 2014. This song was from the movie Zeher and had various remix also released later. She got the Filmfare award for this song.

The beautiful duet of Shreya and Sonu Nigam was released in the year 2010. This was a blockbuster hit from Dabangg and was picturized on Salman Khan and Sonakshi Sinha. This became very popular and raided the charts.

The song from 2004 was released from the movie Krishna Cottage and was sung by the melodious queen. The song was a romantic song and starred Ishaa Koppikar. The song is a soft melody and has beautiful words.

The song from Sanjay Leela Bhansali’s Ram- Leela was released in 2013. The song was sung by Osman Mir and Shreya Ghoshal. She received Filmfare Award for this song and the pitch at which she sung the song was much praised.