Wedding is one such occasion where each and everyone enjoys full on. There is dancing, singing, rituals, friends, family, eating, drinking, dressing up and what not. More than the bride and the groom who are the centre if attraction, other people enjoy the most in any Indian wedding. India is a country where diverse communities and religion coexist. It is obvious that different communities carry different cultures and so their different customs and rituals. But one custom is same for every culture and community that is the singing and dancing during the wedding rituals. The songs may be different but having fun by dancing and singing is same for all.

In recent times people chose to play Bollywood songs during wedding ceremony. Be it a Marathi wedding or Bengali or Gujarati, or anything else, people play fast party style Bollywood Hindi songs to dance on them. Most of the communities, except Bengali, have a common ritual namely Sangeet During Sangeet the friends and family of the bride and groom along with them perform in different songs. Here you will get to see 10 most enjoyable and party-style wedding songs that will make you groove with your friends and family. 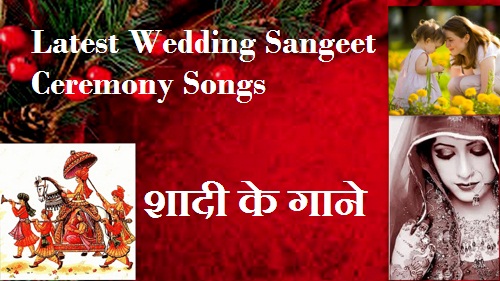 The song was out in late 20s and immediately becomes everyone’s favourite for any traditional occasions. The song is based on the bride, so preferably it plays in bride’s side of sangeet The most attractive thing in the song is the dance moves performed by Kangana Ranaut. Also the music gives you a complete fun mood.

The famous Madhuri-Salman song was released in early 90s. The lyrics of the song are naughty and fun-filled. It is also a song for the bride. Even the song was showed in the movie on the occasion of baby-shower but the lyrics can go well with the weddings as well.

The Srk-Kajol duo performed in the song that is released in the early 20s. This song was featured in the movie on the occasion of Karva Chauth which is another Indian ritual for married women. It can be used by the bride side or can be the groom side as well.

Another Srk-Kajol duo super hit song from the block buster movie of all time ddlj released in the mid 90s. The video of the song was featured during a wedding ritual and it can be nicely used by the groom side. The lyrics say that the groom is telling the bride to get ready and he is coming to take her away.

Released in early 20s, the song was shot for a wedding scene. Kangana Ranaut, the ace Bollywood actress was the main lead of the song. London Thumakda is a Punjabi-Hindi mixed song and apt for any Indian wedding ceremony.

It is an old song from Rajesh Khanna starrer movie. A brother is singing the song as he watches his sister getting ready for her D-day. The song is used in bride’s side of sangeet

It is another fun-filled Bollywood song that makes you go foot tapping with each beat. The Shahid-Kareena starrer super hit movie released in early 20s has this song. It is also a Punjabi style Hindi song, perfect for the Indian big fat wedding.

Kangana starrer movie based on wedding between two different people, the song has Haryanvi style lyrics and singing. The song was featured in a wedding ritual in the movie and best pick for sangeeth ceremony.

Nagada is also a Punjabi style song from the shahid-kareena movie. The song was featured in the movie on the occasion of Roka, one of the rituals of Indian wedding. It generally used in the groom side as the song was sung by a male singer. In this song the groom is telling how beautiful his bride is.

The song, main toh, is taken from Anushka-Ranveer starrer movie released in the early 20s. The song was featured on the occasion of wedding as the duo played the wedding planners in the movie. The song can be used by the groom and bride both as it is a duet song. Also it is a family song so all the family and friends can join the duo while performing the song during sangeet